It’s the players aim to eliminate the opponent’s game pieces. Once a player loses all the game pieces on the board or is unable to make a legitimate move, the game is over. 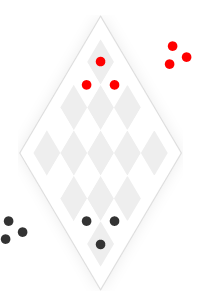 move
three squares (can be combined with both “Kill cards”)

move
two squares (can be combined with both “Kill cards”)

move
one square (can be combined with both “Kill cards”)

«Kill-card», or play it without moving

«Kill-card», or play it without moving

«New entry», you activate a new game piece if possible or play it without moving

«Bishop», can be combined with both “Kill cards”

Apart from the normal “Kill move”, two sequent cards (eg 7/8) from the same suit can be combined in free order. The values of the cards can be used for different game pieces but also just for one. (eg 3 squares for the Q with one piece and two squares for the K with another)

Combinations of three cards can be played if a player holds three cards of the same suit. (Like a flush in poker) The values of the cards can also be split and used for different pieces.  Such combinations are very useful, because you can complete three moves in one action. You can always just play one of the three cards though.

If a least three of your pieces stand in a diagonal row (blockade), they are safe and can only be eliminated with an Eliminator. You can also make blockades with four or even five pieces. It can therefore be very useful to bring your pieces in a blockade position if possible. For such situations, No-move cards can be very useful because you don’t have give up a good position.

If you hold three cards of the same value (eg. K/K/K) they can be played together (without moving) to reactivate one of your eliminated pieces. The reactivated piece first stays outside the game board before it can be activated with a 9 card. You can play this action even if none of your pieces are eliminated just to get rid of the cards. 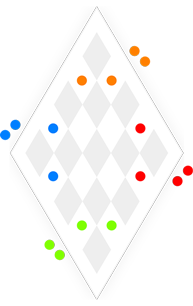